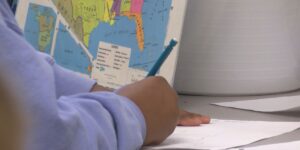 While much of the world is engaged in a frantic scramble to get vaccinated against covid-19, there’s one group noticeably absent from the queues of people at vaccine clinics: children.

The Pfizer-BioNTech vaccine is still approved for use only in those aged 16 years or older, and the Moderna vaccine is only for adults. Both are now in trials for younger age groups, and results are expected by the summer. The Oxford/AstraZeneca and Johnson & Johnson vaccines are also due to start trials in children soon. But in a world where most vaccines are given to children under two, why is it that during a global pandemic, children are being left behind? And what does it mean for how the pandemic will unfold in adults?

One reason children are not yet priorities for vaccination is that they are much less affected by SARS-CoV-2 infection than adults. Children make up nearly 13% of all cases reported in the United States so far, but less than 3% of all reported hospitalizations and less than 0.21% of all covid-19 deaths. When they have symptoms, they are similar to adults’—cough, fever, sore throat, and runny nose—but less severe.

Even a year into the pandemic, it’s not yet entirely clear why this is the case. Research points to a different immune response to viral exposure in children, which may signify that their immune systems are able to neutralize the virus much faster and therefore stop it from replicating. Children may also benefit from cross-protection by antibodies to other circulating coronaviruses that they are more regularly exposed to.

And there’s also the possibility that children have fewer ACE2 receptors in the cells that line nasal passages, which are the doorways the SARS-CoV-2 viruses uses to gain entry to host cells and infect them. That would make it less likely for the virus to get a foot in the door. There is a more serious complication of SARS-CoV-2 exposure that can occur in children, called multisystem inflammatory syndrome in children, or MIS-C. However it is rare, with fewer than 1,700 cases and just 26 deaths reported across the US.

Children’s apparent resilience to covid-19 makes them a lower priority for vaccination, especially when demand for vaccines far outstrips supply.

Children also are a challenge in vaccine development—and in any kind of drug development—because they are considered a vulnerable population, says Beth Thielen, a pediatric infectious disease specialist at the University of Minnesota. “We want to take extra safeguards to protect them from injury,” she says. “We tend to just be a lot more cautious about enrolling children in studies and not exposing them to undue risk.”

The prospect of the potential harm from trialing a new vaccine or drug in children outweighing the benefits is of particular concern when it comes to MIS-C, says Anna Sick-Samuels, a pediatrician in the Division of Infectious Diseases at the Johns Hopkins School of Medicine. MIS-C is thought to result from a massive inflammatory response to the SARS-CoV-2 virus. “It will be important to assess whether the current MRNA vaccines can lead to an antibody response that also triggers MIS-C or if this is only a complication of the viral infection,” she says.

It therefore seems likely that there will be a delay before children start getting vaccinated in large numbers. This means there may be a demographic shift in covid-19 infections as older sections of the population acquire immunity and the burden of infection shifts to the unvaccinated younger groups. It doesn’t mean more children will get the virus, but if fewer adults are at risk, children will be overrepresented in infection numbers relative to adults—the opposite of what is seen currently around the world.

It raises the possibility that delaying the immunization of children could make them a reservoir of the virus in the population, which could continue to seed further outbreaks. That could pose a problem even for vaccinated adults, says Mobeen Rathore, an infectious disease specialist and epidemiologist at the University of Florida College of Medicine.

The current approved vaccines offer a high level of protection against infection, but it’s not total protection. In the clinical trials, a small number of adults who were vaccinated still got infected, though they were far less likely to get seriously ill. There’s also no data yet on whether the vaccines prevent transmission from a vaccinated but infected person to another person—although research is now under way to find out if they do, and the early signs are promising.

“So the question really is: those people who are immunized, they get the infection—they’re not going to get sick, but you will not be able to stop the infection cycle,” Rathore says. And as long as the virus is circulating in the population, there’s the risk of disease, deaths, and mutations.

Earlier in the pandemic, it was thought that children were less likely to transmit SARS-CoV-2 to other children or to adults. A study of schools in England in June and July 2020, after they reopened following the first major lockdown, found relatively few infections or outbreaks. But further research, especially after the reopening of schools, universities, and colleges, suggests that infection rates are particularly high in young adults.

The evidence on transmission within and from younger age groups is conflicting, says Stefan Flasche, a vaccine epidemiologist at the London School of Hygiene and Tropical Medicine. It’s complicated by the fact that infected children are also less likely to show symptoms than infected adults, which makes them less likely to get tested for infection in the first place. “It seems like we’re in a situation where children can transmit, but they’re not sticking out as the key transmitter,” he says.

That could change once more adults are vaccinated and therefore less likely to get the disease. A similar development has already been seen in the UK, not as a result of vaccination but of more recent lockdown measures that restricted the movement of adults while schools stayed open. “In that setting, it looks like children were actually the residual source of transmission or a substantial contributor to the residual transmission,” Flasche says.

There are also concerns that the new variants may pose a greater threat to children: early evidence suggests they may be more susceptible to the UK variant, although it’s not yet clear whether the higher prevalence of B.1.1.7 in children—compared with the original SARS-CoV-2 strain—is actually the result of lockdowns that reduced adult exposure to SARS-CoV-2 overall.

There’s no doubt that children should—and likely will—be vaccinated against covid-19. They are still at risk of getting sick, and in very rare cases dying, from the disease. For a virus that is transmitted by all age groups, a large unvaccinated section of the population will always undermine efforts to achieve herd immunity through vaccination; assuming, that is, that vaccines can even achieve herd immunity against covid-19.

Flasche believes it’s a long shot. “We have a highly transmissible pathogen where basically everyone in the population is contributing their bit to transmission,” he says. “Even with the best of vaccines, that means that it’s going to be very, very challenging at best to reduce transmission.”

Rathore would love to have a COVID-19 vaccine for children immediately, but says high-risk groups are a greater priority.

“I’m an advocate for children and I want them to be as safe, and vaccines are the best thing we have to keep everybody and children safe,” he says. “But let’s make the best of what we have. We have not done that yet, so that’s where our focus needs to be at the current time.”