A hyper-transmissible form of the coronavirus that causes covid-19 has been found in US sewer systems in California and Florida, confirming its widening presence in the US.

Buckets of dirty water drawn from sewer pipes near Los Angeles and outside Orlando starting in late January are among those in which genetic mutations shared by a so-called UK variant have been detected.

The UK strain B.1.1.7, a mutated form of the coronavirus  first discovered in southeast England in December, doesn’t seem to resist vaccines, but it does appear to spread more easily and has already taken over in countries including Israel, where it’s now responsible for 80% of cases. Some researchers have warned that if the variant takes hold in the US, it could become the dominant form by March.

The new sewage data is consistent with other estimates that the variant is increasing its reach. On January 7, the company Helix and researchers in California used patient test results to estimate that the variant is now responsible for 1% to 2% of cases in the US as a whole and 4% in Florida, about four times the proportion found in early January.

In the sewers of Altamonte Springs, near Orlando, tests on waste water suggest that 4% of those infected have the new variant. “I was thinking it would be in Miami or larger areas. But that was wishful thinking,” says Ed Torres, director of public works and utilities in Altamonte Springs, who oversees the sewage testing program.

Health officials in central Florida initially blamed their B.1.1.7 cases on visitors who tested positive, but the sewer tests in Altamonte indicate that the variant is spreading locally, too. Florida remains largely open for business, including theme parks, which are operating with the use of masks and physical distancing.

According to the US Centers for Disease Control and Prevention, only 611 cases of B.1.1.7 have been directly confirmed nationally via genetic sequencing of the viral samples collected in patient nose swabs, with many of the positives coming from California and Florida. Because only a small percentage of hospital swabs are ever analyzed for what form of the virus is present, the true number of B.1.1.7 cases is certainly much larger.

The US has less ability than some European countries to track variants of the virus because test swabs are not subjected to complete genomic sequencing as often, a situation some experts have likened to “flying blind” in the face of a changing pandemic.

According to the New York Times, as of January about 1.4 million people were testing positive for the coronavirus every seven days, but fewer than 3,000 of those clinical samples were being sequenced letter for letter, a step that’s usually necessary to see what mutations the virus has acquired.

Wastewater offers a chance to monitor the variant more widely, and at lower expense. A single liter of dirty water carries the remains of viruses shed into toilets by everyone who shares a sewer system, offering a readout on the health of thousands, even millions, of people.

Since last spring, some cities have used molecular tests on sewage as an early warning system, since the amount of coronavirus in sewage can predict how many people will turn up in hospitals a week to 10 days later. The reason sewage results go up or down before official case numbers do is that people seem to start shedding the virus into toilets a day or two before they feel ill, and it often takes even more time to receive a test result.

“You can see the post-Thanksgiving spike, and the after-Christmas boom,” says Raul Gonzalez, who carries out tests on sewer water for a utility in Virginia Beach.

The dashboard COVIDPoops19, maintained by the University of California, Merced, tracks readings from over 1,000 sites in 47 countries. Testing experts say the virus or virus fragments in sewage aren’t alive or dangerous.

Sewage tests use a sensitive version of PCR, the testing technology employed in hospital tests. Called digital PCR, it is also employed in so-called liquid biopsies to spot signs of cancer in a blood draw.

When the first reports of the B.1.1.7 variant emerged in December, GT Molecular, a company in Fort Collins, Colorado, was the first to reformat its sewage test to search for the variant. That involves checking sewage for two mutations characteristic of the B.1.1.7 strain.

“We measure the amount of the virus that has the parental sequence and the amount of virus with the mutant sequences,” says Rose Nash, director of R&D at the company. “Most samples are not coming back positive, but what we are seeing across samples that do come back positive is about 5% levels of the variant. We are expecting that to increase.”

Because the sewage test has only been in use for a few weeks, it’s too soon to say on the basis of that evidence alone if variant levels are rising or falling. “There is no distinct trend yet in the variant,” says Mike Shaffer, who manages data for Oxnard, California, a beach city northwest of LA, which found low levels of the variant in January.

Shaffer says he also wants to confirm that the test is really finding the UK variant, not some look-alike strain, and says the Oxnard sewer samples were sent to Stanford University for sequencing. Christopher McKee, CEO of GT Molecular, agrees that the science behind the variant test “is still pretty nascent.”

According to GT Molecular, several other districts in California and Florida have positive results but haven’t announced them. “To me it’s worthless if you don’t put the information out there,” says Torres. “We need to communicate it to people who can do something about it.”

Soo far, however, news of the variant in sewage or its spread has not led to any major change in public policy. As yet, there is no national plan to deal with the threat that the variant will spread quickly and cause case numbers to rise.

Robert Levin, the public health officer for Ventura County, where Oxnard is located, presented the sewage findings to a meeting of a supervisory board last week. “They found a tiny amount of the variants that are considered hyper-transmissible,” Levin said. “The impact that this will have on our county cannot be predicted. This is uncharted territory.” 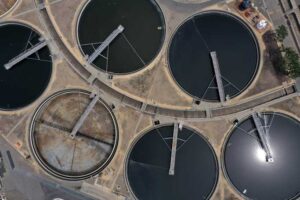