In the coming weeks, a volunteer in Boston, Massachusetts, will be the first to trial a new treatment that could end up creating a second liver in their body. And that’s just the beginning—in the months that follow, other volunteers will test doses that could leave them with up to six livers in their bodies.

The company behind the treatment, LyGenesis, hopes to save people with devastating liver diseases who are not eligible for transplants. Their approach is to inject liver cells from a donor into the lymph nodes of sick recipients, which can give rise to entirely new miniature organs. These mini livers should help compensate for an existing diseased one. The approach appears to work in mice, pigs, and dogs. Now we’ll find out if it works in people. Read the full story.

The most viewed post on Facebook last quarter was a 69 joke, featuring reposted footage from an episode of the TV show Family Feud. The post, originally an Instagram Reel, had more than 52 million views on Facebook, according to Meta’s quarterly report on the most widely viewed content on the platform in the US. It was just one of many spammy meme reposts to feature in Meta’s own list of its top content on the platform.

This quarterly report, first launched a year ago, was created in part so that Meta could tell the story it wanted to tell about Facebook: that its users are not bombarded constantly with extreme political content. But in trying to do so, it has demonstrated something else: the most popular content on Facebook is often awful, recycled generic memes. Read the full story.

The news: Mouse embryos recently generated from stem cells in a lab show more brain development than any synthetic mouse embryos created previously. While others had created mouse embryos from stem cells, none had reached the point where the entire brain, including the anterior portion at the front, began to develop, according to the researchers.

How they did it: The new model embryos, which bypass the need for sperm or egg cells, were developed in the lab alongside natural mouse embryos. They mirrored the same stages of development up to eight and a half days after fertilization, developing beating hearts and other foundations of organs.

Why it matters: The findings could help scientists learn more about how human embryos develop and provide insights into diseases, as well as providing an alternative to animals for testing. Studying how mouse stem cells interact at this point in development could also provide valuable insight into why human pregnancies fail during the earliest stages, and how to prevent that from happening. Read the full story.

1 California has banned the sale of gas-powered cars
The car-loving state phasing out new gas engines marks a significant milestone in the war on pollution. (Slate)
+ It’s not a total ban though—some cars with last-resort gas engines will still be sold. (Motherboard)
+ Automakers are under no illusion that it’ll be an easy process. (NYT $)
+ EV tax credits could stall out on lack of US battery supply. (MIT Technology Review)

3 A student successfully sued his university for scanning his room
The ruling could change how students take tests remotely. (NYT $)
+ Critics of anti-cheating technology are being sued left, right and center. (The Guardian)

5 How worried should we be about “forever chemicals?”
Nearly all of us will have them in our bodies, but research suggests some are more sensitive to them than others. (Vox)
+ Thankfully, a new method to destroy them looks promising. (BBC)

6 How the tech industry remolded the whistleblower
Whistleblowers used to be the underdogs. Now, they’re highly influential celebrities in their own right. (Atlantic $)
+ Here’s the most damning parts of Mudge’s complaint against Twitter. (Slate)
+ Jack Dorsey said he wishes that Twitter never became a company. (Reuters)

8 The crypto industry is anxiously awaiting ‘the Merge’
The switchover from ‘proof of work’ to ‘proof of stake’, which kicks off next month, is a high-stakes test of its resilience. (NYT $)
+ While the Merge starts on 6 September, it could take two weeks to complete. (CoinDesk)
+ Why Ethereum is switching to proof of stake and how it will work. (MIT Technology Review)

9 Why Twitter loves to ask “this you?”
The caustic put-down is punctuating republican outrage. (The Guardian)
+ It’s a real reminder to tweet at your own risk. (Mashable)

10 The eternal quest for the perfect mechanical keyboard
Don’t call it an obsession. For some enthusiasts, it’s a lifestyle. (New Yorker $)

“Just another crybaby hiding behind his lawyer’s skirt.”

—Dan O’Dowd, founder of anti-Tesla group the Dawn Project, criticizes Elon Musk for demanding O’Dowd remove videos of his vehicles running over child-sized mannequins, according to the Verge. 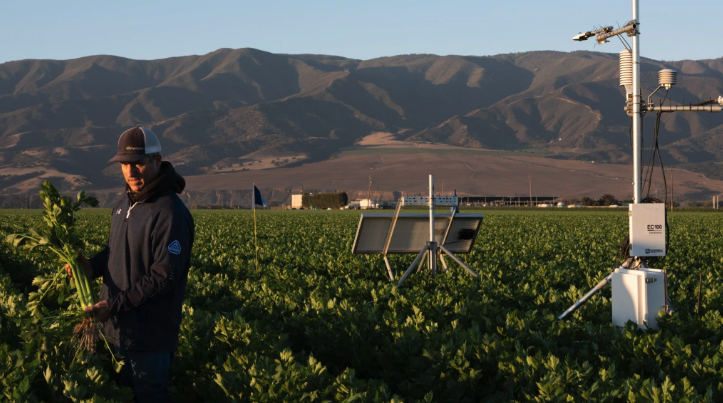 As a machine operator for the robotics startup FarmWise, Diego Alcántar spends each day walking behind a hulking robot that resembles a driverless Zamboni, helping it learn to do the work of a 30-person weeding crew.

Technology’s race to disrupt one of the planet’s oldest and largest occupations centers on the effort to imitate, and ultimately outdo, the extraordinary powers of two human body parts: the hand, able to use tweezers or hold a baby, catch or throw a football, cut lettuce or pluck a ripe strawberry with its calyx intact; and the eye, which is increasingly being challenged by a potent combination of cloud computing, digital imagery, and machine learning.

The term “ag tech” was coined at a conference in Salinas almost 15 years ago; boosters have been promising a surge of gadgets and software that would remake the farming industry for at least that long. And although ag tech startups have tended to have an easier time finding investors than customers, the boosters may finally be on to something. Read the full story.

+ A hierarchy of animals based on how closely they’re related to humans—shout out to the platypus!
+ Want to expand your musical horizons? This site will recommend you a seminal album to listen to each day.
+ I enjoyed this archive of creative infosec stickers.
+ Behold, the world’s skinniest skyscraper!
+ How can I get involved with Fat Bear Week?

Neuroscientists listened in on people’s brains for a week. They found order and chaos.

The Download: generative AI for video, and detecting AI text