Across the US, people are clamoring to get the hottest ticket of the season: an appointment for a covid-19 vaccination. The recommended method is to visit a local hospital website or call a hotline. But the results can be frustrating. Families have spent hours on the hotlines, scoured appointments on platforms like the ticket sales site Eventbrite, and posted desperately on local news sites like Patch and Nextdoor.

The nation’s vaccine rollout has been messy, in other words. Now, desperate people are taking matters into their own hands.

Take Carri Craver. She had spent hours trying to find her father an appointment, once he had qualified for a vaccine under Texas rules. He went to several local pharmacies that were listed on the state’s official site, none of which had any vaccines left. Some told him to “come back later and ask again.”

“I was like, ‘That’s a terrible answer,’” Craver says. “This is going to be a challenge for him. He’s very healthy and in the younger part of the age group. What about the people who are older or can’t go around to check [for vaccines]?”

That very day, January 2, Craver worked from 3 in the afternoon until 11:30 at night to create Covid19 Vaccine TX, a site listing possible vaccination locations across the state. As a digital product designer, she knew that a site like this would have to be easy to read, intuitive to navigate, and quick to update. The idea was that people could upload information about vaccination sites, with each entry answering three questions: Was the vaccine available that day? Was the location taking appointments? Was there a wait list?

Craver loaded the project on the cloud-based spreadsheet service Airtable, posted a link on Reddit, and went to bed. When she woke up the next morning at 7 a.m., one entry was filled out. “At least somebody cares,” she remembers thinking. She spent the rest of the day manually inserting information for about 1,400 locations in the state. “I’ve been going nonstop since,” she says, estimating that she puts in about 40 hours of her free time every week to maintain the site. It has received 50,000 total visitors since launch.

Craver’s site is just one of many solutions created to help people book vaccine appointments—a volunteer effort to fill in the gaps in America’s creaking system.

Another is Vaccinate CA, a site featuring a map of the state. Users can click on their location to see a pop-up that provides the latest information about eligibility requirements, vaccine availability, and contact information so they can book an appointment. Zoelle Egner is one of the organizers. “I wouldn’t actually call it crowdsourcing,” says Egner. “Although we ask the public to let us know if anything we’ve published has gone out of date, we get the information on our website by directly calling vaccination locations and asking medical professionals if the vaccine is available, and how to get it.”

These efforts are rapidly multiplying across the country. Craver’s Texas-based site is working with Oracle to create similar sites in at least 20 states by early next week.

Meanwhile, Leon Wu, a software engineer in New Jersey, heard about VaccinateCA on Twitter and created Vaccinate NJ. Like Craver, Wu created the site in one evening, manually adding information until he could get volunteers to help him verify that everything they’ve posted is correct. “Our tool wouldn’t be very useful if the information can’t be trusted to be accurate,” he says.

Some of these efforts are simply public Google Docs that any user can suggest additions to, which are then vetted. Krystal Knapp created such a spreadsheet of vaccination efforts in Princeton, New Jersey, where she lives, calling it Planet Princeton. Knapp told me in an email she started the spreadsheet, which covers the entire state and is embedded within Wu’s site, by “[looking] up all the initial information and … updating it.”

Dan Benamy, a software engineer in Brooklyn, created the site NYC Vaccine List after he tried to use New York’s vaccine finder to get appointments for his grandparents and couldn’t find information on whether locations had availability. With the help of some friends, Benamy built an automated system that checked 45 official vaccination websites every few minutes.

Crowdsourcing information and recruiting volunteers might help reduce the workload of the people behind the sites, but nearly everyone I spoke to was exhausted, balancing the efforts with their day jobs. “It’s pretty much been from when I wake up to when I sleep, minus a few breaks and meals,” Wu says.

Shikha Jain and Halleh Akbarnia, two physicians dealing directly with coronavirus patients in the Chicago area, know a little bit about that. “We have full-time jobs. We do this on nights, weekends, full time,” says Akbarnia of the efforts they’ve embarked on together to get information to Illinois’s most vulnerable residents. “We aren’t getting paid for it.” But physicians feel some guilt about being among the first to be vaccinated, she says, and witnessing the death of her patients and colleagues from the virus made her itch to do something to help.

Akbarnia created a crowdsourced Google Doc listing locations that are accepting appointments. Jain, the COO of the covid-19 advocacy group Impact, has also created a vaccine clearinghouse for health-care workers who are unaffiliated with a hospital, while Akbarnia has been reaching out to pharmacies to help spread the word about the Google Doc.

“What upset me was that there was a lack of information about where to get vaccinated, tested, or get help,” she says.

These sites are only plugging gaps, and the results are not foolproof. Google Docs will max out at 100 public viewers, which happens frequently, crashing the sites. And such solutions can be less useful for those without a Wi-Fi connection, or who lack tech fluency. Elderly people often are not as comfortable navigating the internet as they are on the phone, so many sites have relied on volunteers to take calls and help guide vulnerable residents. That service extends to those with disabilities or problems with literacy. Crowdsourcing sites are also trying to be creative in reaching out to people who don’t speak English; Jain said some volunteers are visiting churches to combat vaccine disinformation in Spanish, while Craver says Oracle is translating her material for the state’s Spanish-speaking demographic.

Coordinating volunteers and spreading the word during a pandemic requires multiple apps. Benamy says he uses a shared Discord server to communicate with volunteers. Many also use Airtable. Nearly every group I spoke to has a Twitter presence, hoping to draw the attention of potential volunteers or someone who may know an elderly person in need.

That everyday people are having to do what should be the government’s job is not lost on these volunteers. But most don’t see any use in complaining. “The reason we created this group is because we saw at the beginning of the pandemic there was no national plan to really combat this virus,” says Jain. “Part of it was because it was a new virus, and part of it was that there was no coordinated effort to address this as a public health effort. We saw this as an extension of our role as public health messengers.”

Egner agrees. “We’re not here to point fingers or blame anyone,” she says. “The system is under an incredible amount of stress, and it’s a really complex problem.”

For many of these volunteers, helping to create these sites is stoking a sense of community that is very much needed after nearly a year of social isolation. “Up until two weeks ago, I’ve personally felt helpless in the face of the whole situation,” Egner says. “We’ve heard from so many people that our website helped them get vaccinated. That’s something I’ll carry with me forever.”

Craver’s dad eventually did get the vaccine. He and her mother woke up at 3 a.m., drove 45 minutes to their local hospital to book an appointment, returned home, and then came back for their appointment the same day at 1 p.m.

“What 70-year-old should be driving hours at three in the morning to get a vaccination?” Craver says. That’s something a crowdsourced list can’t answer. 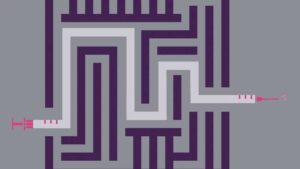