Most image-recognition systems are trained using large databases that contain millions of photos of everyday objects, from snakes to shakes to shoes. With repeated exposure, AIs learn to tell one type of object from another. Now researchers in Japan have shown that AIs can start learning to recognize everyday objects by being trained on computer-generated fractals instead.

The weird idea could be a big deal. Generating training data automatically is an exciting trend in machine learning. And using an endless supply of synthetic images rather than photos scraped from the internet avoids problems with existing hand-crafted data sets.

Training trouble: Pretraining is a phase in which an AI learns some basic skills before being trained on more specialized data. Pretrained models allow more people to use powerful AI. Instead of having to train a model from scratch, they can adapt an existing one to their needs. For example, a system for diagnosing medical scans might first learn to identify basic visual features, such as shape and outline, by being pretrained on a database of everyday objects—such as ImageNet, which contains more than 14 million photos. Then it will be fine-tuned on a smaller database of medical images until it recognizes subtle signs of disease.

The trouble is, assembling a data set like ImageNet by hand takes a lot of time and effort. The images are typically labeled by low-paid crowdworkers. Data sets might also contain sexist or racist labels that can bias a model in hidden ways, as well as images of people who have been included without their consent. There’s evidence these biases can creep in even in pretraining.

Natural forms: Fractals can be found in everything from trees and flowers to clouds and waves. This made the team at Japan’s National Institute of Advanced Industrial Science and Technology (AIST), the Tokyo Institute of Technology, and Tokyo Denki University wonder if these patterns could be used to teach an automated system the basics of image recognition, instead of using photos of real objects.

The researchers created FractalDB, an endless number of computer-generated fractals. Some look like leaves; others look like snowflakes or snail shells. Each group of similar patterns was automatically given a label. They then used FractalDB to pretrain a convolutional neural network, a type of deep-learning model commonly used in image-recognition systems, before completing its training with a set of actual images. They found that it performed almost as well as models trained on state-of-the-art data sets, including ImageNet and Places, which contains 2.5 million images of outdoor scenes.

Does it work? Anh Nguyen at Auburn University in Alabama, who wasn’t involved in the study, isn’t convinced that FractalDB is yet a match for the likes of ImageNet. He has studied how abstract patterns can confuse image recognition systems. “There is a connection between this work and examples that fool machines,” he says. He would like to explore how this new approach works in more detail. But the Japanese researchers think that with tweaks to their approach, computer-generated data sets like FractalDB could replace existing ones.

Why fractals: The researchers also tried training their AI using other abstract images, including ones produced using Perlin noise, which creates speckled patterns, and Bezier curves, a type of curve used in computer graphics. But fractals gave the best results. “Fractal geometry exists in the background knowledge of the world,” says lead author Hirokatsu Kataoka at AIST. 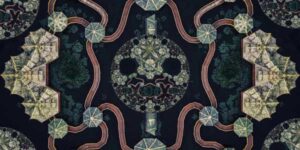 Twitter banned the Proud Boys, but they're still there. Under Elon Musk, there could be more

The Download: India’s deadly heatwaves, and the need for carbon removal